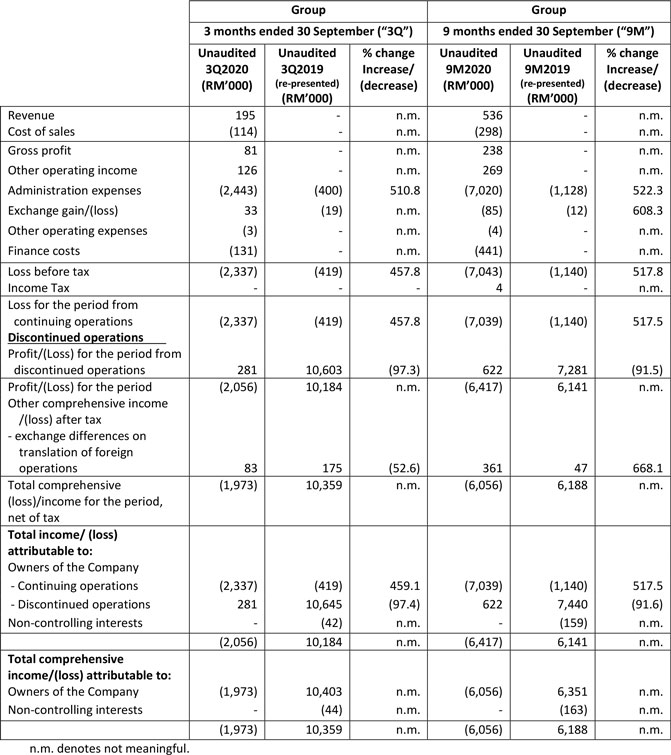 Review of Statement of Comprehensive Income

Revenue for the Healthcare Sector in 3Q2020 and 9M2020 were RM0.2 million and RM0.5 million respectively. No revenue was generated from the Healthcare Sector as the Group had acquired Lady Paradise Sdn. Bhd. which operates a postpartum centre in Petaling Jaya, Malaysia (“PJ Confinement Centre”), only during the fourth quarter of the financial year ended 31 December 2019 (“FY2019”). The revenue for the periods in review, mainly generated from the PJ Confinement Centre has been lower than planned despite operating at near capacity during the recent months due to refurbishment works in the centre that took place progressively.

The Group’s other operating income for 3Q2020 and 9M2020 of RM126 thousand and RM269 thousand respectively were mainly from rental rebates from property leases and government subsidies for business restriction related to address the Covid-19 outbreak.

Administrative expenses in 3Q2020 increased by 510.8% to RM2.4 million from RM0.4 million in 3Q2019 due mainly to an increase in(i) depreciation of right-of-use assets of RM1.3 million for the lease of a commercial property in Singapore for a planned postpartum centre; (ii) manpower cost of RM0.3 million; and (iii) office utilities and overheads of RM0.2 million.

Similarly, administrative expenses in 9M2020 increased by 522.3% to RM7.0 million from RM1.1 million in 9M2019 due mainly to expenses incurred for the Healthcare Sector and increased corporate expenses incurred for the fund-raising exercise completed on 14 January 2020 and the disposal of IEV Group Sdn. Bhd. which resulted in the Group’s exit from the AIM Sector. The increase in administrative expenses from the Healthcare Sector were mainly due to (i) depreciation of right-of-use assets of RM4.0 million arising from the lease of a commercial property in Singapore for a planned postpartum centre; (ii) increase in manpower cost of RM1.0 million; and (iii) office rental, utilities and overheads of RM0.3 million. Increased corporate expenses amounting to RM0.6 million were mainly for consultancy and legal expenses.

Finance costs for 3Q2020 and 9M2020 are RM131 thousand and RM441 thousand respectively, principally derived from the computation of interest on finance lease obligations, in the application of SFRS(I) 16 Leases for the lease of a commercial property in Singapore, which is planned for a postpartum centre.

The Asset Integrity Management (“AIM”) Sector has been reclassified under discontinued operations, upon receiving shareholders’ approval in an extraordinary general meeting on 15 October 2020 to dispose of IEV Group Sdn. Bhd. and thus exiting from the AIM sector. The disposal is expected to be completed by the end of FY2020. The discontinued subsidiaries of the Renewable Energy and Mobile Natural Gas Sectors have been liquidated and disposed off respectively in 2018. The liquidation of PT Pabuaran KSO for the Exploration and Production Sector is nearing completion and is awaiting final business deregistration by the end of FY2020.

Review of Statement of Financial Position

Net carrying value of property, plant and equipment (“PPE”) increased marginally to RM261 thousand as at 30 September 2020 from RM 203 thousand as at 31 December 2019. This was due to: (i) PPE acquisition of RM200 thousand relating to renovation improvements of a confinement centre in Petaling Jaya and office equipment; and (ii) RM250 thousand write-back of an impairment of PPE; which were partially offset by (i) depreciation charges of RM350 thousand depreciation charges and (ii) RM50 thousand transfer of AIM Sector PPE to assets held for sale. Right-of-use (“ROU”) assets decreased by RM4.0 million to RM8.7 million as at 30 September 2020 from RM12.7 million as at 31 December 2019 mainly due to depreciation charges of RM4.2 million during the 9M2020 period and partially offset by (i) the addition of an ROU asset of RM0.4 million for the lease of an office space in Singapore and (ii) a transfer of RM0.1 million ROU related to the AIM Sector to asset held for sale. Long-term receivables and prepayments as at 30 September 2020 reduced to RM5.4 million from RM5.7 million as at 31 December 2019 due mainly to the reclassification of GST Receivable to current other receivables and prepayments.

Share capital of the Company and Group increased to RM119.1 million as at 30 September 2020 from RM107.7 million as at 31 December 2019 due to the allotment and issuance of 76,000,000 new ordinary shares to individual subscribers at an issue price of S$0.05 per ordinary share pursuant to a placement exercise.

Currency translation reserve as at 30 September 2020 increased to RM2.1 million from RM1.8 million as at 31 December 2019 due mainly to the appreciation of the Singapore Dollar against the Malaysian Ringgit during the period in review.

Accumulated losses for the Group increased by RM6.4 million to RM115.9 million as at 30 September 2020 from RM109.5 million accumulated losses as at 31 December 2019, mainly due to losses from continuing operations for 9M2020.

Review of Statement of Cash Flows

For 3Q2020 the Group’s net cash used in operating activities was RM1.0 million. This was mainly due to: (i) an operating loss before working capital changes of RM1.5 million; and (ii) decrease in trade and other payables of RM0.6 million. These were partially offset by (i) decrease in trade and other receivables of RM0.9 million; and (ii) decrease in amount due from an associate of RM0.15 million. Investing activities for 3Q2020 was limited to the net acquisition of property, plant and equipment of RM0.1 million. Financing activities for 3Q2020 was RM0.1 million, mainly from rental discounts on commercial leases due to the Covid-19 viral outbreak.

The postpartum centre at SS2 Petaling Jaya, Malaysia (“SS2 Centre”), has been operating at near capacity despite the 3rd wave of Covid-19 pandemic in Malaysia with bookings having been secured until end 2020 and first half of 2021. The Group had, on 27 October 2020, announced the entry into a lease agreement for a second postpartum centre ("Mines2 Centre") in the Klang Valley region, Malaysia. The Mines2 centre is planned for 50 suites equipped with a nursery, incubation room, kitchen and other support services and is targeted to be operational by end of first quarter 2021.

With the continuing Covid-19 global pandemic, strict health and movement controls remain in place at IEV’s postpartum centre. Notwithstanding, IEV remains optimistic on the prospects for the Healthcare Sector especially with the heightened public awareness on the need for and emphasis on hygiene practices. Further, IEV has been diligently maintaining the quality of its postpartum care services, and at the same time, keeping a look out for opportunities within this sector.

Renovation works for the planned Singapore postpartum centre on Hendon Road has resumed but has since been delayed by several months due working restrictions and potential work variation. As such, sales and marketing campaigns are expected to commence in the first quarter of 2021 with an opening planned for in second quarter of 2021.

Concurrent with the efforts at developing the postpartum care business, the Group is also identifying and searching for complementary and new revenue streams in the aesthetics, wellness and physiology sectors as mentioned in the Company’s circular dated 3 October 2019. Further, the Company has plans on launching services related to alternative medicines (including, but not limited to traditional Chinese medicine) and physical therapy services such as chiropractic and physiotherapy services at its SS2 Centre. Further announcements will be made when there are material developments.